The "big elf" grunts out an obvious insult, directed at Bushwack: "Wineg goronit..." Of course Bushwack ignores the insult and dances over to absolutely pulverize the mage, reducing the once-person to a pancake clinging to life only because of a giant troll humanitarian.

Shrike executes a perfectly placed group of shots into the invisible elf's center of mass. Like magic, the enemy elf becomes visible! He also throws out insults, but to Shrike: "Goronagit, race traitor." The gun then slips in the water bounces off the building and lands in a puddle on his butt. Shrike shoots him again. He falls down, blood trickling from his mouth.

Besides the big guy, the other remaining elf takes shot at Bushwack. Though carefully aimed, it misses by a country mile.

Ever steadfast in his aim, Mulpa plugs away at the big elf. One hit, two hit, three hit, oh wait, Shrike got the three hit, and the big elf goes down. In the process his finger contracts in a death spasm and his assault rifle shoots the rest of its magazine off in a random hail of fire. That random hail of fire catches his lone remaining compatriot. Errant shots stitch a bloody trail up to the elf's head, murdering him and scattering jaw bone across the pavement. Keep your enemies close and your friends closer indeed.

Tupla retreats to the partial safety of solid metal crane legs, which is smart. No one will hold it against, him.

Wraith has much success with the door, but maybe needs five or ten more seconds to get it open. "Almost there," would be the appropriate words to say when anyone asks how she's doing. And it wouldn't even be a lie!

Yay! We won! The elves are dead!

Oh, is that a drone?


Combat Round 3
Combat Round 3!
Look up in the air! It's a rotodrone with some weapons! For those in the know, it is a MCT-Nissan Roto-Drone sporting two rifle sized weapons.
The drone is flying around 10-15 meters up in the air, so everyone can see it...and it can see everyone. 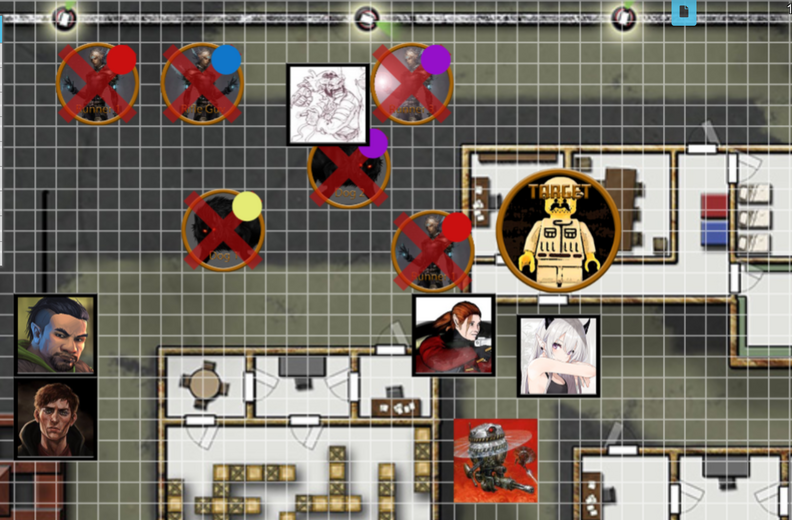 "First Poodles without canines, then flat Knife Ears and now flying Trash bins? What's this? Amateur night? Mang I need a fixer that can set me up for some decent paying runs instead of doing this bull drek for a pittance." Bushwack mutters through the commlink before he attempts to throw a shuriken and moves behind the building to take cover.

After taking several seconds to examine the case for anti-tampering devices, and not immediately seeing any, Wraith gets to work on opening up the case. Despite the rain and the cold, the foxelf makes a fair bit of progress on the device.

The sound of an assault rifle, and a roto-drone, has Wraith glancing back over towards the battleground - the sight of four sprawled out, unrecognized elves has her letting out a slow breath, relieved. Shifting on her feet, the foxelf pauses in her work to give her hands a rub then flexes the fingers a few times to avoid cramping, then gets back to work silently.

"Tulpa, can you do anything about this drone? Otherwise chummers take it down, but take cover!" he barks down the comm unit.

Right, gel rounds are not going to cut it against this thing. he decides to switch up to lethal ammo to take the drone down.

Continuing to use the building corner as cover, he ejects the clip and inserts a new one, before opening fire on the drone.

Remember in that one Neil the Ork Barbarian trid with the archer? The one that splits the arrow with another arrow? Yeah, that one. Got the visual? Okay, great. Now:

As the drone buzzes up over the rooftops in threatening like manner, it becomes a target (like in the trid). Then before anyone else can blink, Bushwack lets fly a shuriken at near super sonic speed. It goes ktoink! and smashes through the drones ventral dome, just below the rotors. Now that shuriken launched at near super sonic speed might have been enough to terminate the drone, but we'll never know. Why?

Well, while Bushwack is fast, Shrike is also fast and before everyone finished blinking he had fired a precise burst from his Ingrams into the drone, a nice tight grouping that splits Bushwacks shuriken into pieces. Not only do some of the bullets rip through the body of the drone, but some of the shrapnel flies up into the counter-rotating blades. Rotors sheer, drone explodes, fire shoots out the exhaust ports, it crashes into the building.

Mulpa and Tulpa are unfortunately left staring at the wreckage as it tumbles from the sky. Combat troll and samurai elf indeed. Bring a folding chair and a beer to the next fight.

Staying focused, Wraith fusses with the lock and finally! The door opens!

Alarms are going off inside too.

But in a moment, the doors nearby Mulpa and Tulpa also open. There is an ear piercing shriek and a noise like two angry cockatrice fighting to get out of a cage after just being shocked awake by a stun baton. Or something like that. Tulpa probably knows that's EXACTLY what they are hearing.

Somewhere off in the depths of the Matrix a security spider is rethinking their security measures, girding themselves to boldly challenge their inept corporate lackey supervisor and demand better resources and a direct link, this all would have gone different if they could interact directly, air gap be damned.


Combat OVER
Combat Over!
No more threats (at least visible ones!) so combat is over. Since Wraith only needed one success, I assume she "bought" it so we can move on! Building is open! Map left for reference. The drone wreckage is basically where the pog is on the map.

Also, this is a pretty cool image of a real roto-drone: 
GM wrote:Staying focused, Wraith fusses with the lock and finally! The door opens!

As the door begins to open Wraith hops backwards, re-drawing her left-hand Savalette while tucking the picks into a pouch - it had opened on her unexpectedly, the elf having thought that the lock would need further work. 'Did I trigger some opening sequence by mistake?' the young woman analyzes, eyes narrowing.

"Doors open, <chuui kanki>! " Wraith comments in a low voice over their comms.

Uncertain on what to expect beyond the door Wraith brings her heavy pistol up while taking a defensive stance.

Trusting in Bushwack, Shrike and Wraith to deal with any threats, Mulpa gives each of the elf runner corpses a quick
Perception (Intuition 5, Perception 6, +2 Visual = 13 Pool)
13d6>4
looking for any credsticks, weapons, and any easily stripped valuable gear that he they can quickly sell, including any decks or likely foci, and stashing the decks and comlinks in his faraday pouch in his armoured vest.

"Deal with the target. I will look here for any valuables. We can split it all once we get to a safe place to discuss this better."
Mulpa
Street Cred: 0
Notoriety: -1

Bushwack runs and puts himself before Tulpa in the doorframe. Whatever caused the noise and wants to get to the decker will have to go through him first.

"What's the plan brainiac ? Something inside this building I need to deal with ?"

Turns out that was a rhetorical question. He scratches the metal doorframe with his spurs as if answering the proverbial call with an even louder, even more piercing, even more hair raisingly annoying, response.

Shrike spends a few seconds scanning the area, making sure there were no further surprises. Anything else want to go FUBAR tonight?

Shrike nods to Mulpa before moving over to where Wraith has opened a door. "I'm going in and finding our contact. Bushwhack looks like he wants to play with whatever is in there and we have less than fifteen minutes to complete our objective.

Shrike sweeps into the building through the door and using any available cover to maintain some stealth, makes his way to where their contact is supposed to be. He'd better be there, otherwise there will be some trouble.

Provided he encounters no further contacts, he makes his way towards the office. If he spots the warehouse manager, he stops and says the codeword.

"I trust Findler-Man," he calls out to the contact.
Top
Locked
57 posts