Bushwack is poised for action.

"Time to prove I'm more than just a pretty face. I Got none of that fancy cyberware to suppress a barghest's howl but you know a bit of self confidence and intimidation goes a long way and its time to make myself a target so the squishies don't get butthurt" he thinks.

He switches on his modified Noizquito and blasts out an old favorite to draw the attention of beasties and opponent runners.
https://www.youtube.com/watch?v=z5rRZdiu1UE

14 damage 2 Armour penetration from the spur + net hits. Damage however is stun because, that is one of the things that sweep attack does, it turns a lethal weapon attack into stun damage
.

Starting to wish I'd brought heavier firepower. Let the Barghest attack the invisible runners, deal with what I can see. Bushwhack can deal with the other one. These thoughts pass through Shrike's mind as his body speeds up thanks his wired reflexes

"Wraith, Tulpa, get moving and get that door open! We'll cover you!" He barks some orders as his smartgun link focuses on the newly revealed Runner and his ingram smartgun spits multiple bursts of silenced gel rounds. He remains as much as possible behind the corner of the building using it for cover.

If the runner goes down, Shrike will shoot the Barghest fighting Bushwhack if somehow it is still standing, then at any other targets that present themselves. Priority goes to the mage that is present somewhere.
Top

Initiative 11
1d6+7
Hmmm... I think that the whole team won't be mages... there has to be one or two holding up all of the Invisibility. I am thinking the one on the far right is a good one to aim at, since Shrike's shot to him made this one visible... I am sure someone else will shoot at the visible one.
Resisting Invisibility
If Mana (Base Invisibility): 9 Dice If Physical: 8 Dice
Initiative 11
Initiative 1
Mulpa
Street Cred: 0
Notoriety: -1

”Well that feeling sucks.” Tulpa complains at his now wet sock and soaking shoe. He cuts his complaint short as he remembers his place. His allies seem to slow down as the deckers own internal systems begin fighting back against the drug cocktail he had inhaled nearly half an hour ago now. Just as fast, he snaps back into the moment- the sound of rotors drawing him to the immediate situation.
”Watch it! We have airborne contacts!”

Tulpa looks to Mulpa and sees him focusing on the incoming targets. ”I got your back.” He says through his own ballistic mask. He holds his pistol in a two handed grip, lowered to the ground for now.


11+4d6
: 23
: Seeing Mulpa shoot at unseen targets, Tulpa will take his first action to shoot a spray of gunfire from his machine pistol at the now visible shadowrunner. ”Hah!”

: Tulpa will scream, enjoying the additional adrenalin shooting his gun and being shot at was giving his system. ”Take That!” He lets loose another shot before coming to his senses. He aims at his original target if it is still standing, or at either another visible target or where he thinks one of the invisible ones might be.
”Oh, Shit.” Tulpa realizes he is somewhat exposed and takes cover behind the crane’s leg he is next to.


Tulpa will lean around his cover and take a moment to set up an aimed burst on either a visible target, or where he thinks an invisible figure may be and let loose another three round burst from his machine pistol, in somewhat more control of his faculties.
Street Cred: 0 | Notoriety: 2
Perception: 7 [9] (No modifiers)

Wraith risks a quick look in the direction that Shrike fired, taking note of the opposition 'Runner making an appearance. Trusting the rest of the team to take care of things, though, she darts east-wards towards the locked door that is her target.

Once there the foxelf crouches to reduce her profile, then begins to examine the lock - if its a physical lock, she pulls out whatever device seems most appropriate to the situation and gets to work on it.


OOC Comments
I'm assuming that between the distance and the time taken to examine the lock, that if it's a lock she can deal with, she won't be able to start until next round so will forego any rolls for now. Wraith has actual lockpicks, an autopicker and a sequencer, along with a survival knife if brute force is needed to access a panel or whatnot.
Wraith
Current Health Status: 3 Stun boxes (-1CM)
Alyfox#0371 on Discord
Street Cred: 0 Notoriety: 1
Distinctive Style: fox ears, fox tail (both black furred)

Soundtrack wrote: I must've been high//I know they look and tell//I must've have been high

Zowee! Zip! Zop! Zap! We got magic, we got bullets, we got Bushwack, we got chaos (no literally, there is chaos).

Bushwack, faster than everyone by far, even the terrible elf warrior. He smacks the poor doggo hard, the doggo goes down hard with a yelp and a splash. After his smack down he taunts the opposition with his prodigious presence. He attracts a hail of gunfire, one bullet almost comes close to hitting. It took the cherry off his stogy.

From the corner of the warehouse, Shrike takes precise action, in addition to commanding the situration. Blam blam blam! His first shots against the tough looking elf seem to have little effect, maybe they piss him off.

Mulpa is calm and precise with his shots, too. His first burst strikes the mystery X, and his hit is revealing: another skinny ass elf pops into view. In return the newly revealed elf quickly casts a spell towards Mulpa and Tulpa. Their world goes chaos just for a moment, but it lasts only moments as the elf dives for cover instead of maintaining the spell. Mulpa's second burst hits the (he must be an angry) elf's attention. The angry elf shoots back with a burst from his assault rifle. The burst takes Mulpa in the armor, but it still hurts!

The remaining dog erupts in fire, sending a blast towards an invisible enemy. Once on fire, and they are on fire, the newly revealed enemy is probably an elf too. The elf is super mad, like on fire, and he unloads a long burst from his submachinegun right into the poor dog's face. Unlike the humane treatment Bushwack showed his pup, the elf bullets blow through the back of the dog's head.

Tulpa's drug fueled chaos results in bullets everywhere. One bullet literally pings the elf "tank" in the face. Doesn't do much through the helmet, but still, shocking!

But wait! You say! What about Wraith? What about the other "X"? Well well well! Wraith makes herself the lowest threat and slinks to the office door where she investigates the lock. Sneaking too, the remaining invisible opponent heads towards the same spot, but he pauses right in front of Shrike -- and Shrike can see the fellow's splish splashy approach. 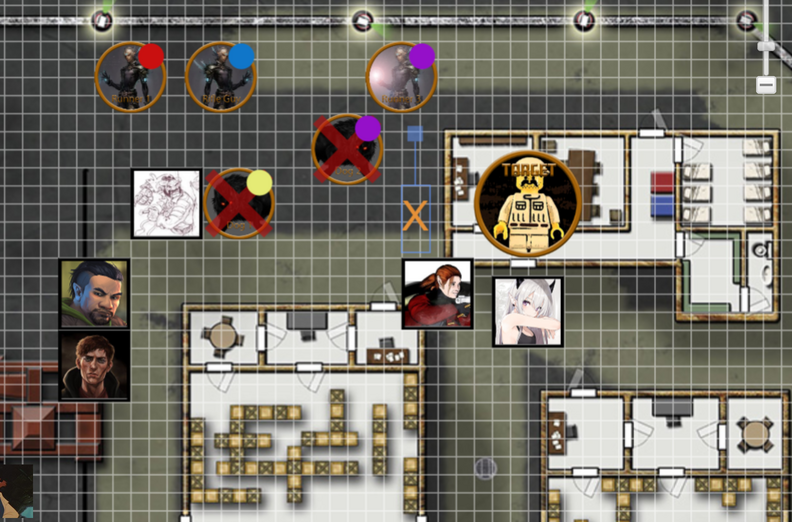 Bushwhack changed the arch of his run towards the mage and with same singularity of purpose as a bull charged the caster getting ready to receive a hail of bullets.

He liked the planning and the quiet part of the runs well enough, it's just that his contributions seemed more impactful once somebody other than him decided that automatic fire or offensive magic was a solution to a problem. Truth be told he lived to smell the acrid trail of metallic sulpher and the ozone discharged when mages messed with the fabric of reality. There was no thrill quite like it.

He grinned widely when he attempted to hit mage against the electric fence. SHOWTIME MOFO!

With just a grunt in acknowledgement of the bullet impact, Mulpa takes a second to aim before taking three careful shots to the centre of mass of the apparently heavily armoured Elf.

Stupid tea drinking, tree hugging, pansies! I am thinking our Mr. Johnson may have hired a couple teams to have us compete for his business. Poor Elves, no way they can stand up to Humans, Trolls, and especially Dwarves! I wonder if they were warned of our presence if this was set up as a competition.
Mulpa
Street Cred: 0
Notoriety: -1


GM wrote:But wait! You say! What about Wraith? What about the other "X"? Well well well! Wraith makes herself the lowest threat and slinks to the office door where she investigates the lock.

'A keypad, this will take some time,' Wraith thinks to herself, examining it for a moment then reaching for her tools. Although seeming focused fully on the lock, the foxelf is doing her best to also keep an ear out on her surroundings, not wanting to get blind-sided by an attack - with her reflexes, even a half-second might be enough to at least get up a defense.


OOC Comments
Passive/reactive audio perception (11 dice)
11d6>4
First off, she pulls out the roll of duct-tape and applies several strips to the keypad, in places where she is most likely to touch while disabling it - although Wraith is wearing light gloves, she doesn't want to take any chances on leaving fingerprints behind. Once that is done, she starts on opening the keypad case itself, using the appropriate tools from her lockpick set.

"Keypad and maglock. <Sore ni torikunde>," she murmurs over the channel, dropping the polite suffix in favour of expediting the comment. "Let me know if company is heading my way. <Kudasai>."

As Shrike notices the footsteps in the rain, it diverts his attention to protect Wraith.

Trying to sneak past whilst your frakking idiot team turns the place into a DMZ eh chummer. Nice try but no cigar Shrike smirks to himself as he turns his Ingram Smartgun to the position where the sole remaining invisible runner is and opens fire with a burst