Soundtrack wrote: This ain't no guitar, bitch, this a Glock (Woo)//My Glock told me to promise you gon' squeeze me (Woo)

Bushwack and Shrike shadow a few meters behind Tulpa and Mulpa, watching out as the nerd goes to work.

The troll is reasonably quiet, and doesn't seem to set of any warnings. Neither does the elf stalking nearby. Shrike is focused on his teammates, so he misses the small splash of a small foot amongst the noise of the rain. Bushwack though, locks on to the sound, something is approacing from the north side of the warehouse.

Mulpa and Tulpa work quickly to access the lock's internal systems. No problem, and Tulpa is jacked in. It's not a complex system. It appears as if he's on a local grid that contains only the warehouse complex. Each building is a host and each one looks like a box with a simple padlock icon on the outside. Not even a rendered interpretation of a shipping crate. Just a "default*" color box. It's barely a system...but Tulpa's knowledge of the Matrix assures him that it is not connected actively to the Aztec grid. Tulpa is jacked directly into the current warehouse's host. Inside, the system's iconography is just as basic. There a few nodes that are currently offline with giant padlocks, but he can see the light controller and the door controllers. The doors don't even have a padlock, just simple latch. It is connected to the main geid though, so it will likely send a signal to someone if the door is opened. The lights are connected to motion sensors and some other weird device that looks maybe like a stun baton with a chicken printed on it. The padlocks on the lights are not very big, but there are six of them. There is only one connection point for the motion sensor (disabling it once will affect all the lights) and one connection for the chicken-stick. The lights are connected back to the main system through the motion sensor. The doors and the lights aren't connected, their connections to the monitor will have to attacked correct.

*Almost all 3d software have some sort of default color, that's what this is! 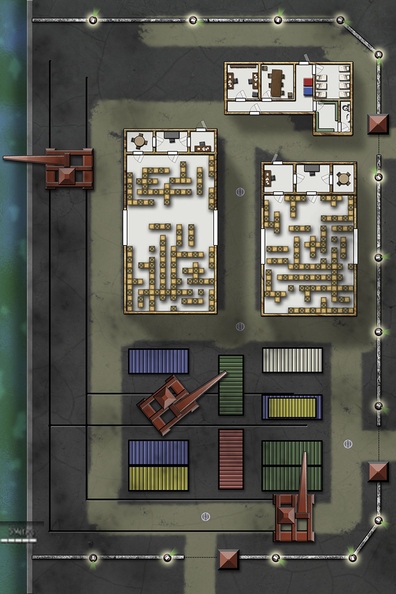 What do you do now?

Wraith hangs back for a minute s Tulpa and the others move forward, keeping a rear-guard - though they had spotted one of the canines earlier, she is pretty sure that there were two, if not more. Not seeing any of them has her more than a little concerned.

Once there is some space between herself and the rest of the group, Wraith begins to move forward as well, cautiously and carefully, using cover and shadows as much as she can for stealth purposes. One of her Guardians still in hand, the young elf continues to survey the courtyard for those hounds.

Shrike wrote:"We need to distract the dog lest it take a bite out of Tulpa. If it spots him, put it down quickly and quietly. Anybody got anything that can do that, speak up now, else silenced weapons only, preferably non-lethal ammo."

Licking her rain-slick lips, Wraith cocks her head at Shrikes' words, but before she has a chance to respond, Bushwack chimes in with his usual bravado, drawing a smile from the elf. After another quick glance around, Wraith refocuses on the comm-chatter. "I have not seen anything yet; <Tashika> - I am certain that I heard two different animals, however."

Wraith glances up to the sky, shielding her eyes from the rain with her free hand. 'Fuck this rain! Why in the hells did I come to Seattle when I could have gone home?' she growls at herself, soggy tail curling against her thigh now. With the breeze coming off of the Sound dropping the temperature further, the waifish young woman is having to fight off shivering, even with the water-resistant jacket.

"<Su'imasen>," Wraith starts, clearing her throat softly. "I can move into position to meet the contact if none of the guard animals show up," the elf offers, creeping northwards slowly as before.

by Bushwack
"I hear someone or something approaching on the north side of the warehouse. Small feet. I will investigate with Wraith. Distract if possible. Neutralise if needed."

Bushwack sounds off. Every word is stressed individually and the sentence doesn't flow from his mouth. It makes no sense until you get the ping from the commlink. Bushwack spoke slowly so his cheap commlink wouldn't have problems in converting it to text for the benefit of Mulpa in VR.

The text comes with timestamp and estimated location of the guard, dog or other unsub chum.
All times are UTC-07:00
Page 2 of 2