Pressing up against the inside (her side) to the right of the door, Wraith peers 'around the corner' to look into the adjacent room; switching between her three possible visions she studies it carefully, fox ears rotating to hopefully detect unseen movement. The lack of electronic connection has her concerned, given her preference for text or at worst subvocal communications while trying to be sneaky.

Course, Bushwhacks ... odd behavior as her frowning, tail-fur puffing out in a sign of agitation. "What the hell are you doing?" she growls in a low tone, having taken a moment to glance back in his direction; while Wraith wants to say more, she figuratively bites her tongue, shifting her attention back to the small room beyond. 'Looks like maybe holding cells, or perhaps examination rooms...' she thinks to herself. Nose twitching from the smoke and fox ears tilting back the young woman studies the room for perhaps another ten seconds.

Audio Perception check 12d6
12d6>4
If nothing is detected visually or audially, Wraith slips through the doorway into the smaller chamber, crossing over to the left side of the doorway, then peering into the adjacent 'cell', to try and get an impression of what it might be.


Description for Death Otter
The figure that comes through the door is relatively small, perhaps five and a half feet tall, and while having a bulky sort of outline moves smoothly, showing agility and grace. At least one firearm can be seen, a heavy pistol in their right hand. Also, the figure has what looks like a tail of some sort, covered in floofy black fur. The figure is clad in dark grey including gloves, the bulk caused by an overly large black jacket and combat boots. Part of their face is covered by a mask that hides everything below the eyes, including nose; this leaves their white hair visible, held back in a tight ponytail. I'm taking into account the smokiness of the room, but more might be visible depending on the resolution of the camera, whether it has low-light capabilities, etc. Also, Wraith would love some cameras that tiny!
Wraith
Current Health Status: 3 Stun boxes (-1CM)
Alyfox#0371 on Discord
Street Cred: 0 Notoriety: 1
Distinctive Style: fox ears, fox tail (both black furred)

Stygge wrote: ↑
Mon Nov 22, 2021 4:58 pm
"You cool with doing the detective work here?" Stygge asks Shrike. "I'll go after those truckers and see if I can't borrow a rig." She climbs into her van and gets ready to jack in. "Ping me if we ain't taking no trailers."

Shrike nods to Stygge before moving over to the trailers. He takes cover at the side, weapon ready.


Muppet Man wrote: ↑
Sun Nov 21, 2021 11:47 pm
Looking that the trailers, there are no doors or hatches on the sides or bottom. Their might be on top, but Shrike can't see up there at the moment. A drone probably could no problem....

However, the trailer with all the commotion has been knocked to the side enough he could stick is head inside to see. Maybe better yet a mirror or a drone...

He inches to the corner and looks around for anything reflective he can use, be it debris or something he needs to break off.
Going to have to invest in one of those periscope cameras for this sort of situation. If I can see inside, it means I don't have to react in the split seconds my wired reflexes gives me when I breach.
If he can see something usable, he will collect it and then hold it to get a look inside without getting shot or hopefully noticed.

INSIDE OF A SUSPICIOUS SCONE FACTORY WITH DANGER WRITTEN ALL OVER IT OR IN THE DARK
Interior Scone Factory Secret Sub-Basement:

Bushwack gets the the violent and noisy reaction he was (probably) hoping for. Two stim patches are plenty awaken the elf (E3). The elf screams and bucks like a bronco. His hands scrabbling for purchase on the hard floor as he tries to twist around to face his assailant. His face at first is pure anger, screaming in some language, then upon realizing who is staring back at him, he stops struggling and just says, "...the fuck?"

Over the din it is hard for Wraith to hear anything, but she sees Mulpa unmoving on the floor. He is currently acting as a doorstop to the only cell door that is open. He's probably not dead judging by her visual scans. There is no blood. She here's the screaming stop, and there's a moment of quiet.

In that moment of quiet, she hears the slightest scuffing of fabric on concrete from the cell right behind Mulpa. Someone is in there.

For Death Otter, it's a slightly disconcerting situation. First troll noise, then screaming, then silence. Her camera shows a fox-eared elf very cautiously entering the room. 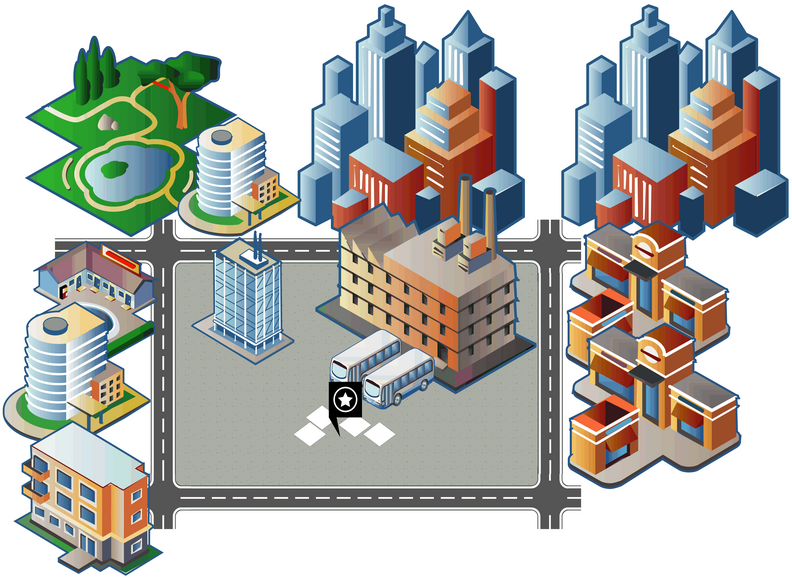 Combat for Stygge and Shrike: No need for more initiative passes, you guys have knocked out everyone worth knocking out.
The scene inside the trailer is easy for Shrike to take in at just a glance, even using a shard of chrome as a mirror. The interior of the trailer is packed wall to wall with equipment, probably high end matrix or computer hardware. There are at least four of the elf special forces types dead or dying scattered about. A fifth seems to be still alive, but with only enough strength to moan pathetically as her intestines are slowly ripped out by a huge cyborg. The 'borg is looking at the guts like they are a miraculous and wondrous thing, never seen or even thought of before. Childlike. It moves on and pulls other things out. Blood spatters the walls as its monstrous metal hand crushes an organ.

It is not aware of Shrike, too caught up in its discovery.

On an otherwise ill fated run, Stygge is the only one with some luck. The truckers waiting to load up concrete or drop of raw material have a waiting area, they line up along one of the streets, and much like old-fashioned cabbies, they wander around talking to each other while waiting for a fair.

There are two lines. One line, heading east, is comprised of just the tractors. They will haul the fully loaded automated concrete mixing plants to specific job sites. The other line, heading west, is comprised of rigs with bulk cargo trailers waiting to get into the plant to unload. The drivers are milling about near a little shack with a couple vending machines.

Basically, Stygge just has to choose: trailer or no trailer?


SEVERAL HUNDRED METERS AWAY INSIDE AN ANONYMOUS BUILDING WITH GOOD SIGHTLINE TO A TRAILER SITTING OUTSIDE OF A SCONE FACTORY
The job was to put a big bullet in the brain of a cyborg if the cyborg poked its head out from the trailer sitting in Arthur Dent's virtual cross-hairs. It seemed simple. It WAS simple. But over the last ten minutes a bunch of fuckwads have started messing around with the target area. One just looked into the target trailer.

Nothing ever goes to plan, does it?
INFO: 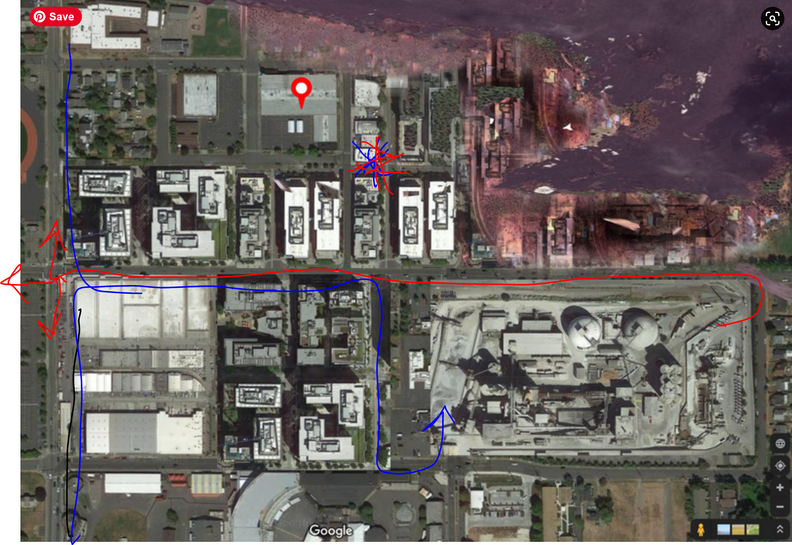 Watching the major roads, Stygge notices a pilot car followed by a

, it appears to be following the same route to the factory. 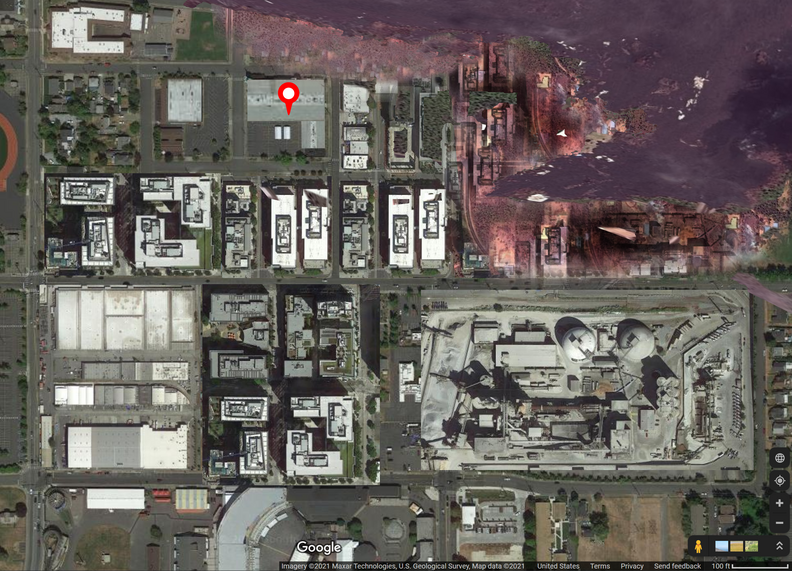 WELP, it was looking to be about time. The trouble was that she still wasn't sure if these two were the ones that had let her out of here, or security detail to check on the inmates. They didn't look like security detail, but the troll did seem like he was trying to help the fallen guard(??) out there.

Death Otter didn't want to give away her position by taking, so she concentrated a little and looked just 'under' what her eyes were telling her. An underlayer that would normally be covered in festive, colorful AR artifacts and adverts and all manner of Matrix spam...but here was curiously quiet. The weirdly modified elf's commlink was a little stubborn about it, but it was hard for Otter to miss one of the few wireless signal sources in the room even if it WAS trying to be coy. Under other circumstances a little hacking might be next, but she decided that the situation called for a lighter touch. This time. For now.

Wraith gets an unexpected ping from her commlink as a message arrives. When she checks it, there's a little animated cartoon of an otter with cybernetic implants over half of its head, including a big red cybereye, wearing a dapper tuxedo and doing a little dance. The dance of DIPLOMACY, where COOLER HEADS prevailed!

"Want a cigar ? Don't bother reaching for weapons or comms" he points to a bag where all there gear is collected.

"Here is the deal.
Option 1 You tell me what the fuck you are doing here what the fuck this place is and if it doesn't directly seem to fuck with my very limited plans of operations I let you go,with the contents of Santa bag here if it seems plausible enough, I don't think I'm your enemy here but I want to and learn a thing or two.

Option 2: you play the tough silent type and say nothing. I will knock you out and try my slap patches on one of your friends and see if they are smarter. I won't respect you more, sorry.

Option 3 you lie to me, bullshit me, enter into hostilities or you make the mistake of thinking you can take me wounded and unarmed and you disrespect me in the fucking slightest. I will curbstomp you so hard it will hurt for months and I promise the fact the you woke up in Tir commando hospital with a fucking cigar in your butt will mess up your future options... Your reputation as a tough guy will be over and you will imagine the sniggering and gossip for the rest of your miserable life. It's hard to come back from that sort of thing. My advice: Avoid the sarcasm, avoid the irony avoid the sense of entitlement and all these things Tir elves with rainbows out of their butt are known for, for just 5 minutes cooperate and the rest of your life will be better for it and choose option 1. You can plan your revenge after that. My name is Bushwack, here is the card of my fixer."

Extends his hand, smiling for having handled the etiquette just right
Baron Munchkinhausen#4543 on Discord