Bushwack follows Mulpa's suit. He slams an old army surplus duffelbag on the pool table, takes out his weathered reinforced trenchcoat and straps on his other armor accessoires. He struggles momentarily to don the helmet. He realises he is losing time and making an ass of himself and slams it in place by headbutting the wall so the plaster comes off and the helmet clicks into place.

Somebody tell me if there is a backdoor out of this joint where our patron can leave quietly. If need be I can punch a hole in a wall. If not I can persuasively dissuade entrance to this establishment from armed or unarmed unsubs until I get a comms message she is in her car.


He moves to the entrance looking outside to gauge the competition, flexes the hand of cyberarm to make the spurs shoot out, clenching a cigar between the clawlike daggers. He puts the cigar in his mouth, lits it, inhales, exhales and finishes while the magically awakened realise he is activating the spurs as a weapon focus.

"Unless any of you smarter people has a smarter plan, that goes without saying."
Baron Munchkinhausen#4543 on Discord

MacFear takes out one of his burner phones and connects it to the network Yu supplied. The Fomorian stands up, cracks his neck, and then nods at Yu and Mrs. Hoffner.

"Sure," He says, "It sounds like easy money and most of our team seems to be on board. I can hold my own in a fight, and from my experience the troll gets shot before the dwarf, unless she happens to be a mage. How about I escort the two of you while the
Unless he receives further instruction from either team, MacFear intends to escort the two to safety while the heavier hitters prepare to run interference on the showdown outside.
?"

MacFear unholsters his Predator V from its concealed holster with his right hand and reaches into his coat and pulls out a combat knife with the other hand. Then he waits for Yu to respond to @Mulpa's question.

When targeted by a spell (including a critter’s Innate Spell), the character is harder to affect. This potent ability makes casting both benevolent and malevolent spells on these characters much more difficult. The character adds 2 dice to their resistance test against any spell. If the spell is one that is not normally resisted (such as Invisibility), the character still rolls their Arcane Arrester dice pool of either two dice and reduces the hits rolled on the Spellcasting Test by any hits they roll. For instance, if a mage casts Invisibility on a character with Arcane Arrester 1 and gets 4 hits on a Spellcasting Test, the target character rolls 2 dice and gets 1 hits, meaning only three of the hits on the Spellcasting Test are used to make the target invisible.
; Made Man - the Trogs; Nasty Trog; Reach 1; Thermographic Vision


Mulpa wrote:"If the Mr. Johnson does not survive, we can't get paid. I say we take them up on the protection job. 500 nuyen just to follow along, and a promise of further compensation if there is actual trouble. I think it is a good investment for the future."

"<Hai, rikaishi, douishita>," Wraith replies quickly, glancing to Shrike and the troll then drawing a Hammerli light pistol from a concealed holster from within her cloak; a magazine appears from within the cloak as well, and inserted into the sidearm with a soft 'click'. The foxelf is careful to keep the weapon's muzzle down, concealed from the rest of the bar by her body if possible. "While I do not necessarily trust Hoffner-san, her entourage seem on the level."

Bushwacks' somewhat more ostentatious display has Wraith looking back in his direction, raising a brow while doing her best to hide a smirk and a brief nod, then shifting her attentions back outside - the sound of motorcycles evident to her keen hearing. "There are more incoming, though I do not yet have visual. Could be more trouble, or bystanders."

Then to Shrike, verbally: "I did not come heavily armed, like Bushwack seems to - I will be most effective in close quarters." A comment that, given her slight size, may seem laughable to some. Though early evening, Wraith switches between regular and thermographic vision as she keeps an eye out, just in case.

>>Tulpa, if you are able to get floorplan for this building and a map of the neighborhood could you forward it to my orientation system <onegaishimasu?><<

Yu motions for Mulpa and MacFear to follow, adding, "The alley and out, we have a vehicle two blocks east. Zip has already activated it and the security systems." He leaves unstated the obvious, east is the worst possible direction to head right now.

There's a pause and that normally means subvocal or AR communication

Bushwack gears up, but his observation provides even more value: the elf gang looks like Ancients, but the other group resembles the Spikes, but is not all troll, more like an affiliate gang trying to make an impression.

Looking outside, the four Spikes-ish gangers on bikes rolling up the street from the south. They are one block away, but moving at a little over a walking speed.

Wraith is able to within a few short seconds find a
it's the map, yo!
of the bar online.

The other patrons are trying very hard to ignore both the runners and the ruckus outdoors, focusing on their food and drinks and forced casual conversation. The bartender and server look far more nervous, there is a shotgun laid out on the counter. Another ork comes through the door to the kitchen holding a large kitchen knife, also looking a bit concerned.

Tulpa, Shrike, Wraith and Bushwack can also see a troll step out of the office into the hallway to the alley. She looks worried for sure. 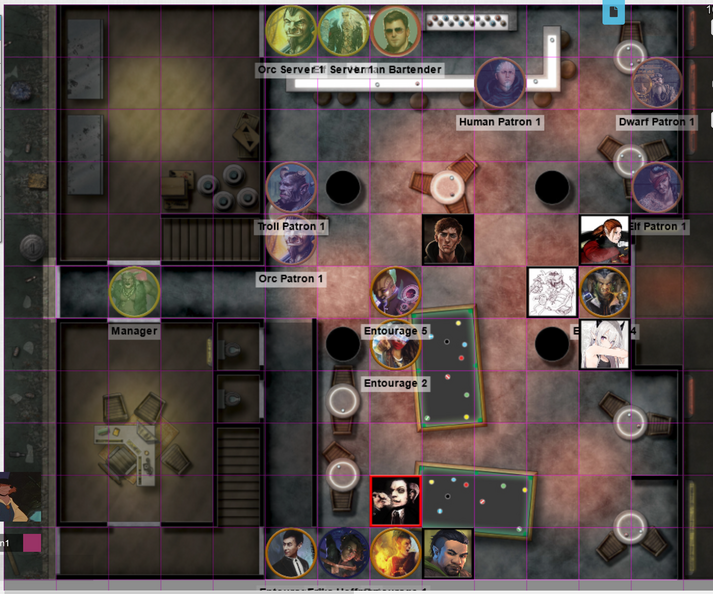 "Whowever needs to leave, LEAVE NOW. Whoever wants to stall somebody coming after the Johnson take cover and hide yourself so you got the drop on them with surprise."

Bushwacks drags a biggish couch and chair from the bar on the porch of the bar blocking the entrance and starts lounging on the couch cigar and drink at hand looking like he owns the neighbourhood.

He shouts and points to the leader of the Spikes affiliate gang drink hand.

"Hey Dipshit. Lord Torgo sent me to check on your diapered asses. If you don't fucking decimate those knife eared tree huggers in the next minute he said I could kill you all and take your bikes and weapons. I don't think you will but if you do well enough he said your status might change. If any of those dandelion eaters make it to porch and force me to take my cigar out of my mouth the deals off."

Bushwack puts his hands behinds his head as he reclines in the couch and exhales a big puff of cigar smoke as he looks to gang as if they poses the same threat as school children.
He puts on his noizquito to start blaring out https://www.youtube.com/watch?v=GGU1P6lBW6Q Wagner's Ride of the Valkyries so its futile to try to communicate further as nobody wont hear anything anyway....
Baron Munchkinhausen#4543 on Discord

Keeping an eye out on the groups outside, things were looking like they were about to escalate. Getting away from here was the plan, but doing the obvious was not a good way to go about it.

"Wraith, you with me, Bushwhack, follow on behind Mulpa and Macfear after a moment. You look like you can take a hit, so protect the principal. Tulpa, block any communications from in here, so they can't warn anybody that she is leaving. Let's assume they know about their car and are tracking it."

Wraith wrote: ↑
Wed Jun 09, 2021 3:32 pm
Then to Shrike, verbally: "I did not come heavily armed, like Bushwack seems to - I will be most effective in close quarters." A comment that, given her slight size, may seem laughable to some. Though early evening, Wraith switches between regular and thermographic vision as she keeps an eye out, just in case.

"Only got my pistol on me and some ammo, really should bring more firepower with me. Can't seem to go anywhere with you guys without needing a lot of firepower. Not even a Stuffer Shack or a bar." Shrike gives Wraith a little wink and a wry smile, as he draws his pistol

"We take my bike and run outrider. Get to the car before Yu, see who is following it. A couple of heavy pistols will slow down what's coming for a moment. Assuming that they are using a vehicle or drone to intercept..." Shrike switches over his clip to APDS, "we will need penetration."

With that, he slides out of the door and heads towards his bike, keeping watch, but at the same time, trying to remain as unobtrusive as possible.